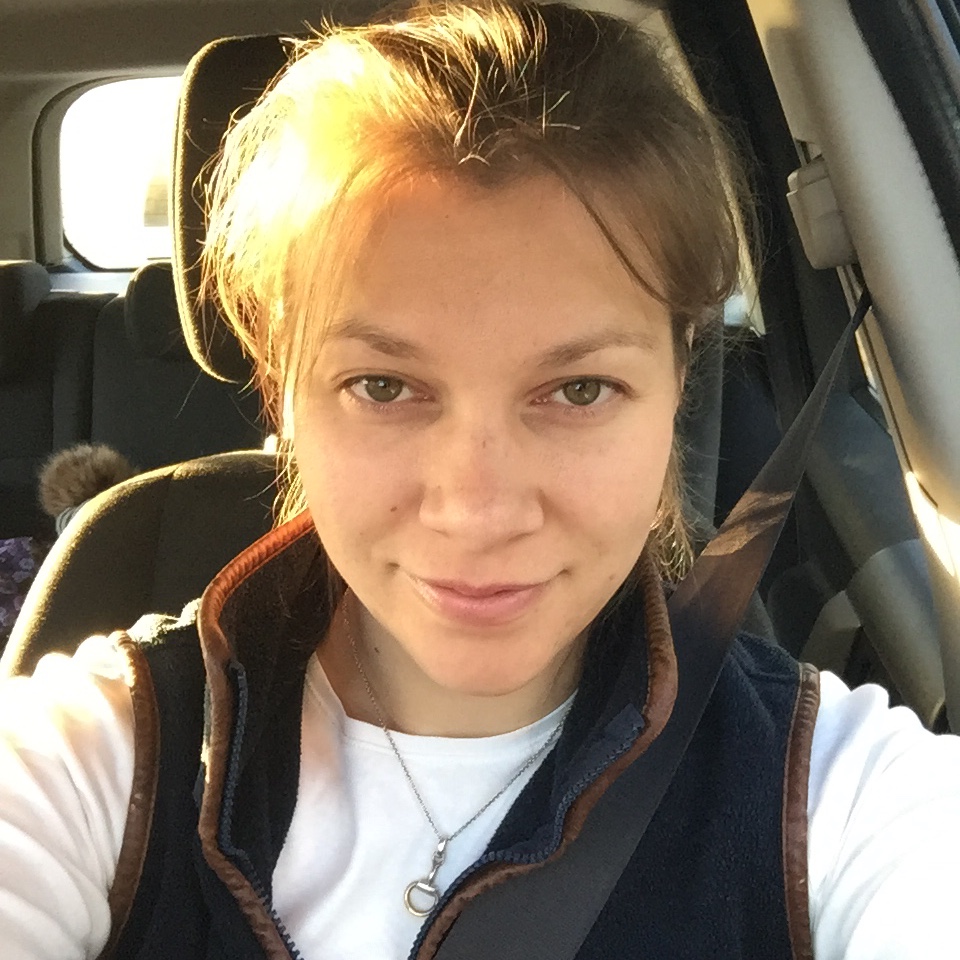 This year’s Your Horse Live was my fourth consecutive year!  It has me going back each year to see the demos and peruse the extensive shopping stands.  This year I was lucky enough to get a complimentary ticket but Alex was keen to come (can you believe it!?) so I paid for him to come along too.

I was highly restrained when it came to the shopping (especially compared to Badminton) and although there were lots of beautiful things, I only came away with a trailer-tie bungee and a new competition whip.  I would have liked to walk away with the ponies from the Rescue Village too but that wasn’t to be!

Alex was particularly keen on the 3.5 horseboxes and the Ifor Williams trailers but made do with a pork roll instead! 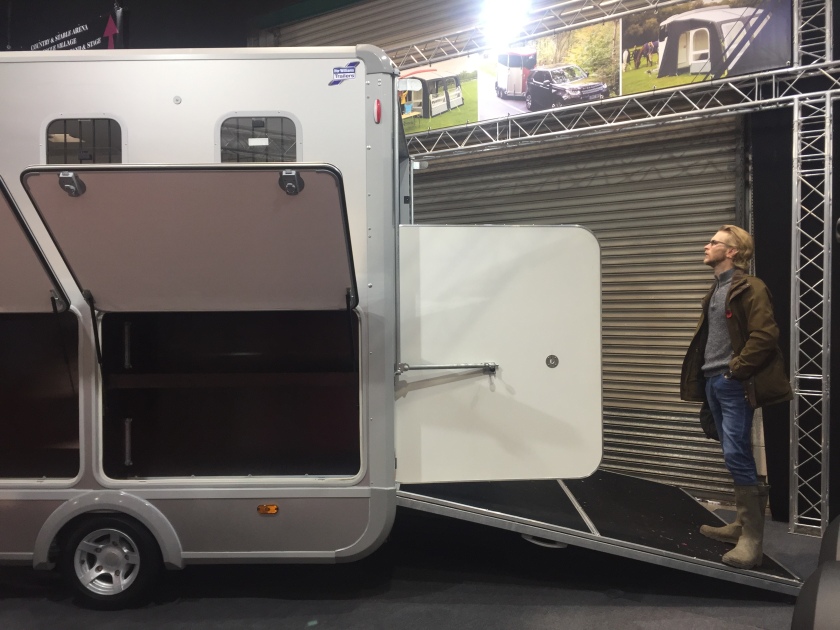 Charlotte’s demo was what I really wanted to see.  It was interesting to see her coaching one of her riders.  She kept telling her to go more forward and really go for it, it was somewhat reminiscent of my lessons!  It was also a good reminder of the importance of transitions – I get too lazy when it comes to that but if Charlotte says I should.. I should!

We stayed with the demos to watch a bit of Jonty Evans jumping with Padraig McCarthy.  Jonty’s big fall was just before my hip replacement and I’m in awe of how he spent 6 weeks in a coma, suffered a brain injury and is now back eventing.  What is really incredible is how effortless his riding looks considering how the injury has affected his thought process and speech. 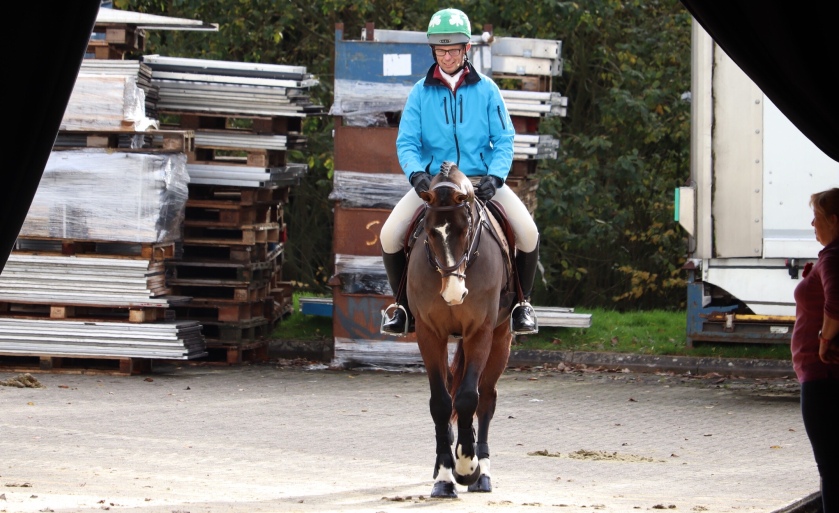 We left that demo early to go to Charlotte’s signing; I had taken my copy of “The Girl On The Dancing Horse” to get her to sign but unfortunately the queue was shut off just as we arrived.

We managed to catch some of Sharon Hunt’s cross country demo with Karla (from Muddy Mayhem) riding.  If you don’t already follow her, she is hilarious and the way she pinged round the tiny arena with tight skinnies was so brave! 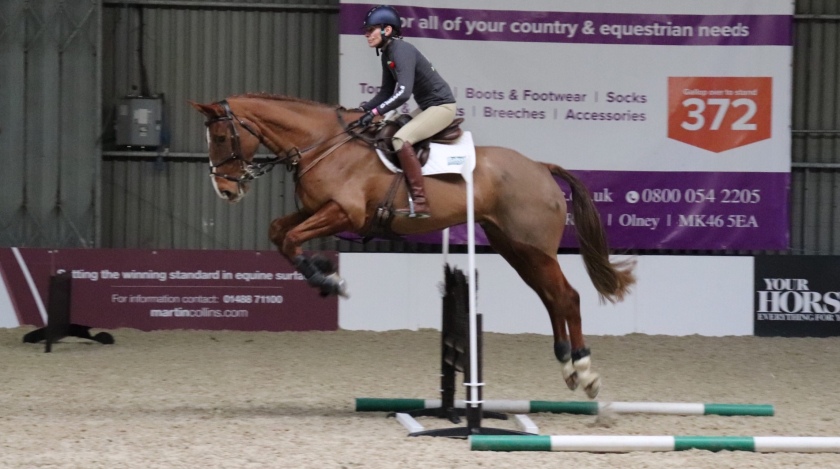 Our last watch was Ben Atkinson’s behind the scenes demo.  Last year we watched his proper demo – I was totally in awe of what they did then so it was really interesting to get more of an insight into how they train their horses to do that.  You clearly have to be very calm, brave and confident to do the kind of liberty work they do.  I would love to give it a go but I think I would need to do a course or something first.

I had a thoroughly enjoyable and educational day (and Alex enjoyed his pork roll!)  I can’t wait to see the line up for next year – I’m already thinking about who I hope will be on their demo line up!

I’ve been watching Olivia Towers’ vlogs for a while now. It is really rare to be able to get an insight into the riding and competing of someone who trains to Grand Prix let alone to visit their yard and watch them ride their young horses.. but that’s what I did yesterday!

To start off, her home/yard is what dreams are made of: post and rail paddocks along the drive and in front of the house; a barn with stables, wash area and solarium; a big horse walker; a beautiful indoor school and gardens/grounds with a literal lake in them.  It actual felt a bit intrusive to be able to wander freely around the yard (it must be really strange for her parents) but I guess that is all part of being an all-sharing influencer and I really appreciated the opportunity.

Olivia rode four horses through the day.  She started with Barbie, the massive (much bigger in real life than you can tell on vlogs) palomino four year old.  She was pretty majestic and Olivia showed the straightforward schooling routine she does with her twice a week (alongside one hack and one lunging session).

Next up was five year old Joey; my new favourite!  Olivia and her mum explained that although he looks like a chunky mini Valegro, actually he is not strong and is behind their other five YO.  They said that he isn’t particularly forward or keen on schooling.  I sat there wondering what you do with a horse like this when you have Grand Prix ambitions and he’s not bothered – is there a point at which you say, regardless of breeding, maybe this isn’t for him?  Or do you change your plan to get him more interested and just accept that it will take longer to get there?  When I asked, Libby (Olivia’s mum) confirmed that they need their horses to get to Grand Prix and that he will get there.  It was amazing to see him transform after warming up and even my untrained eye could see that although he starts off in first gear, he is going to be spectacular!  His schooling is not dissimilar to what Olivia does with Barbie but with higher expectations.

She showed far more lateral work with Moley, the other five year old, who (although taller and more babyish in looks) they said was far stronger.

After lunch and some free time to explore Olivia did a demo on Eagle.  Her “top of the string” horse Wilf was out with a sting to the face but Eagle is competing at Inter 1 so he is pretty impressive too. Both Libby and Olivia both made it clear that Eagle and Wilf are less naturally able than the younger horses so that, combined with the fact that they are the first ones she has taken through the levels, means that the younger ones should be more successful than the older ones.  Regardless, seeing Eagle’s pirouettes and the beginning of his piaffe and passage was pretty special.

So my points to take away from the day 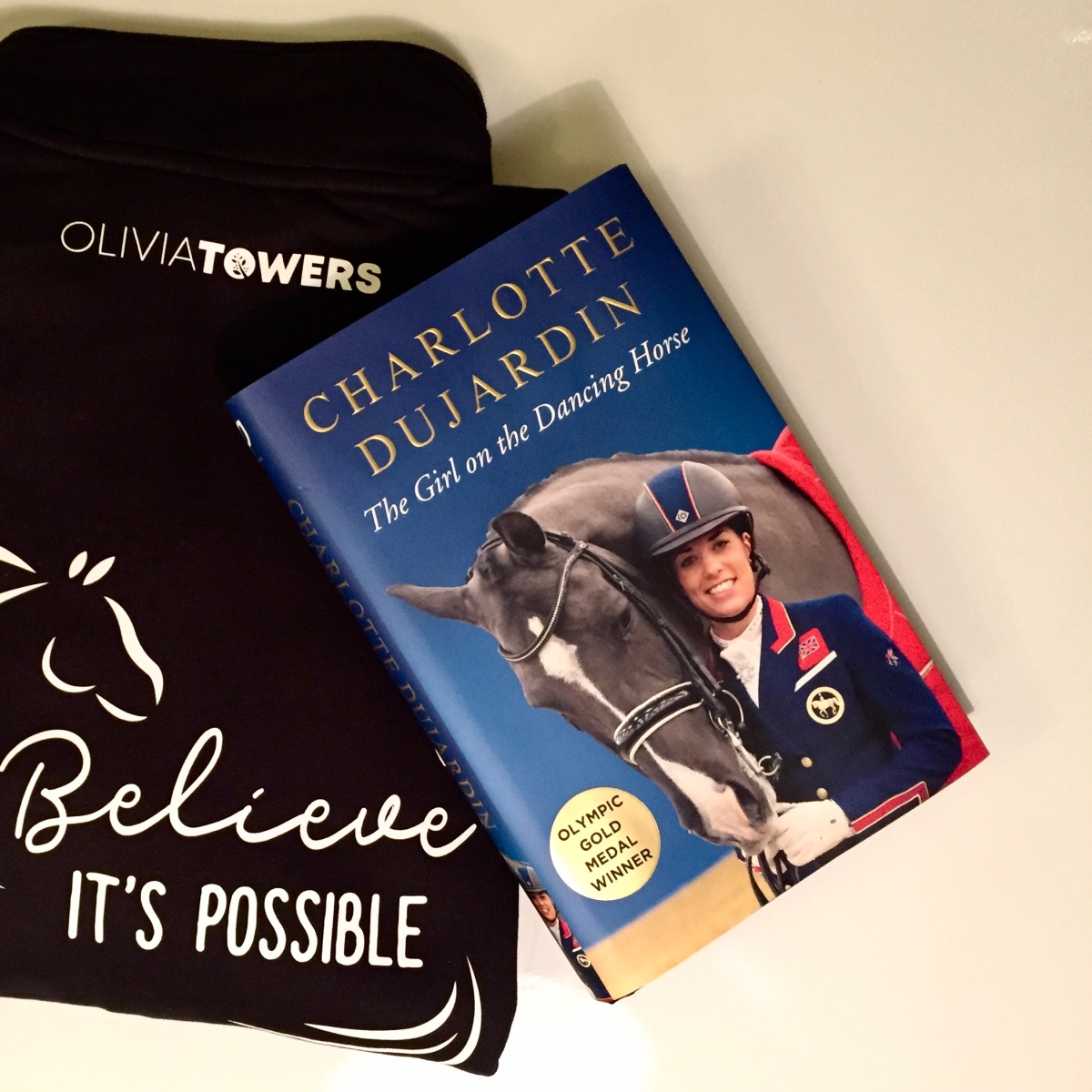 My boyfriend’s mum bought me this for my birthday.  Since she is non-horsey I was so touched that she got something SO perfect for me – Thanks Sam!

I saw a demo from Charlotte at Your Horse Live four years ago and found her disappointingly flat.  I judged her from that moment but since reading her book I have done a 180.

She’s not a trained public speaker, she’s not an actress or a presenter, she’s just an incredibly talented and hardworking rider who has found herself thrust into ‘celebrity’ status.  In her book she makes it clear how hard she has found this side of things.

The book follows her journey from riding show ponies, through her parents sacrificing owning their own house to keep their children’s horsey dreams going and to teaming up with Carl and Valegro.  She shares how her dedication to her career affected her relationships and as you read it, you live each success and challenge with her.  By the end of the book you feel like you know her personally.

If you need some inspiration to boost your riding ambition and to help you believe that it IS possible or are just intrigued to know more about Charlotte and her dancing horse(s) I highly recommend you give this a read.

It has been two years since the hip in Young Hip and Horsey happened and I’ve now decided to make a change when it comes to social media. I wish I could squish this account together with the one I’ve had forever but I can’t. I love the community we are part of here and everyone is welcome to come over to @poppypeaandco to continue to join us on our adventures!
After too many days of feeling grotty and not riding, we had a little spin in the school this evening - BLISS