At the end of February it will have been six months since I started riding again with my new hip so I thought it was about time I looked back on what Pea and I have achieved in that time.  There are lots of links to past posts in case you have missed any!

In all honesty, in September the key achievement was getting on and staying there for more than ten minutes!  I found it really hard to sit in the saddle in the first place although it gradually got better as each ride went on and each time I rode.  By the end of the month I managed to trot my way round an Intro dressage test for Dressage Riders Online.

I found riding quite mentally challenging in October because I felt guilty about how little I was doing.  I was still only riding for ten to fifteen minutes at a time.  However, at the end of October, I cantered for the first time since my operation.  It was very uncomfortable!

At the beginning of November we took Pea to Lyneham for my first lesson in about six months.  My instructor rode Pea for a while and then I did and I went away feeling on top of the world.  I had a few weeks of feeling really good about my riding (although I was still finding cantering really challenging).  However, at the end of the month I had a bump in the road where I was in pain again.

After feeling so positive about my riding for most of November, December was a bit of a flop!  I had a really good lesson at the start but then I was away house sitting and had two bouts of feeling really grotty so I didn’t do much ‘proper’ riding.  I did do a Christmas yard hack into Bourton on the Water to sing a Christmas song in the river and take my boyfriend for a ride on Christmas day.

January was a much better month for riding.  I took on the Bronze Top Barn Challenge which meant I rode (or did groundwork with Pea) for at least three hours each week.  I also entered and completed my first competition with my new hip (which was also our first competition away from home and in an indoor arena) and had another amazing lesson with my instructor.  Everything was a bit disconnected and wonky at the competition but Pea started working so nicely in my lesson and I finally felt like she was starting to accept the contact and become supple.  This continued when I was schooling at home too and I was strong and comfortable enough to be riding for longer.  I’ve certainly found that a longer warm up has been beneficial and the difference in my leg since my hip replacement has meant that I’m still comfortable enough to keep going afterwards!

February was meant to bring my second competition of the year and my step back up to prelim (which I was competing at before my hip replacement) but first we had snow and then the equine flu saga exploded so I haven’t been out competing and I haven’t been out for any lessons.  It has been really frustrating because I feel like things were just starting to fall together and now they are on hold HOWEVER Pea has been schooling really nicely at home.  She is a lot more off my leg and seems to be working more correctly.  The big achievement this month has been our hacking.  I haven’t always been confident about hacking but this month I have been going out for 60/70 minute hacks ON MY OWN (with Pea!)  A massive achievement for me.

I’m hoping to get back out again in March providing my yard owner is happy for that to happen.  I want to be confidently riding prelims with passable canter movements by the time the summer comes so lots of practice, some lessons and trying out some more competition venues is on the ‘to do’ list.

I came across Dressage Riders Online through the equestrian blogging and social media scene. I have thought about doing online dressage in the past but since I have had transport and have been trying to get out and about to improve my confidence, I have never done it until now. Obviously things are quite different at the moment (three months post hip replacement). I’m only managing short rides (15-20 minutes maximum), haven’t yet cantered and can’t really open my left hip enough to be straight in the saddle. When I started riding again I made it my aim to enter the August intro class – as intro’s last about four minutes and involve mostly trotting this was actually going to be quite a challenge!

The weeks went by and I hadn’t done anything about it but finally last Saturday I arranged for my personal videographer (or boyfriend as he is more commonly titled) to come to the yard with me. I had relearnt intro B the day before (having done it several times years ago) and walked through it. Slightly irritatingly, I did it all the wrong way as since I last used the dressage letters, they had been swapped over! My brain thought C was A and so on. Luckily I realised my error so on the Saturday, after a five minute warm up mostly in walk, I managed to ride through the test the right way round AND my boyfriend managed to video it. 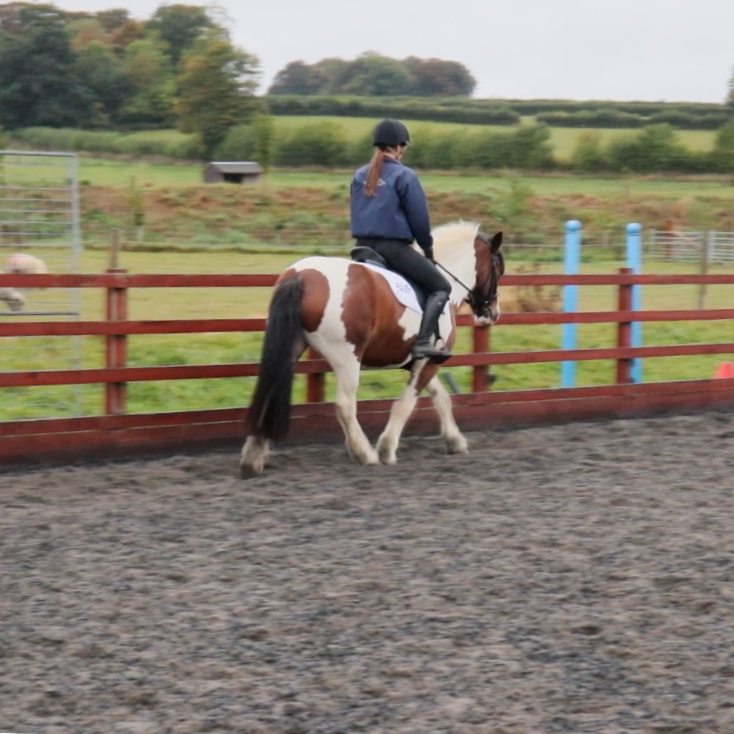 Watching the video back afterwards, I could have clearly done with more warming up time but on the flip side I could also see myself getting more uncomfortable as the test progressed. I couldn’t have done any more, it was a one shot (not) wonder!

Entering was easy, you select what you are going to enter and pay for it then upload your video or put forward a link to it on YouTube. Entries close on the 26th of the month so I was just in time!

So how did I do? I actually really don’t mind what percentage we got I am just proud to have ticked off a little goal in the long journey of getting my new hip into riding however results should be up tonight so I will let you know!

The question is, what should be my goal for October?

It has been two years since the hip in Young Hip and Horsey happened and I’ve now decided to make a change when it comes to social media. I wish I could squish this account together with the one I’ve had forever but I can’t. I love the community we are part of here and everyone is welcome to come over to @poppypeaandco to continue to join us on our adventures!
After too many days of feeling grotty and not riding, we had a little spin in the school this evening - BLISS